Looking back, what would I have done differently?

It’s been nearly two months since my first triathlon, and I have barely moved since.

I would love to say that I had kept up the same level of training I had been doing before the event, and that I had booked my second, third and maybe fourth triathlon, but the reality is that I haven’t.

I did the Leonard Cheshire Disability Tri Together triathlon with my boyfriend and we did a lot of training beforehand. By the day itself, we were more fit than we had probably ever been, and made it round the course in one piece, which was a relief to say the least.

We deliberately booked a relaxing holiday as a way to unwind in the days afterwards, and we enjoyed every minute of being on a beach and exploring Lisbon in Portugal for the week that we were away.

The unspoken expectation was that we would get back into running, even as the weather cooled and the evenings got darker, but it didn’t happen. I haven’t become a complete couch potato. I have carried on with my martial arts and have tried to stay active, but I will admit I haven’t kept up the level of exercise I was doing in the run up to the triathlon in September.

The day after the event I was expecting to be completely broken, aching and unable to move very far at all. As part of the training we didn’t put all three disciplines together, so I was concerned about whether I would have been able to physically complete the event, and what the impact of having pushed myself that far would be on my muscles. As it turns out, we were fine.

Although my muscles ached and I was quite stiff, it wasn’t nearly as bad as I thought. I had booked the day after off of work so that I could relax and recover but it was quite a busy day so that plan failed before it started.

I think it was the sports massage that we had afterwards that really made the difference. Face down on the massage table in the tent by the finishing line was so relaxing that the exhaustion took over and I was practically asleep just minutes later. But the volunteer masseuse worked her magic and eased my tight calves and aching shoulders, and I think this is what made the aftermath much more bearable than I thought. After that experience, I would have to highly recommend a sports massage after your triathlon, if only to reward yourself for all your hard work!

Looking back, what would I have done differently? I think I would have tried harder at bricks, as I was too quick to stop running after a long bike ride, mostly because it was painful, but I know now that I could have pushed myself a bit more, and a bit more often if I had had the willpower. On race day, the brick didn’t feel as bad as in training. I think this is because there was the transition period in between which meant a tiny break in time to take a breath. Saying that, the bike to run stage was pretty brutal, mostly because by that point I was exhausted and I don’t mind admitting it.

I think I should have done all three sports, and put together a mini triathlon to practice transitioning so that I had some experience of how it all worked. I had cycled around a parking lot and practiced getting on and off the bike quickly, but this was perhaps twice, and it’s difficult to replicate the conditions of the day.

I would have definitely got some specially fitted running sneakers much earlier. This would have avoided those painful shin splints I had at the beginning of training, and would have meant that I could have trained much more effectively in the earlier months. But this sort of realization comes with experience, and I didn’t know that I had shin splints and that there was such a simple solution, so hopefully my pain will help someone else along the way. Perhaps without the shin splints and the twisted ankle, I would have been able to run further and for longer. I may have had more confidence in my ability, and pushed myself a bit more.

Looking at the other competitor’s times afterwards, I noticed an interesting pattern. There were people who had really good times in two disciplines, but then had noticeably slower times in the third. For example, I was in a swim lane with a man who had done a triathlon before and looked like he knew what he was doing. But he was really slow at swimming, although he then left me for dust in the cycling stage. I noticed his break down afterwards and he was really quick in the cycle and run, but the swim had obviously let him down and he had lagged behind on the score board. Clearly the key to success is being strong in all three disciplines, but nobody’s perfect.

Being quick and efficient in transition is also a way to bring down your overall time. My first transition was much slower than my second, but I think by the second I was very much in the swing of things and I felt more confident coming into it.

If I had been taking the whole triathlon a bit more seriously I could have researched a bit more into how diet impacts performance. As it stood I was trying to eat more healthily but that’s as far as it went. This coupled with the increase in exercise meant I lost weight. I had always been looking forward to carb-loading before the day – who doesn’t love an excuse to eat as much as you want? But does a massive pizza the night before count as carb-loading or was it just an excuse to pig out?

In the end, we wanted it to be fun, and for a professional triathlete I know it would be very important to get the diet just right and the transition down to a fine art, but this was our first event and I feel like I did the best I could do. Taking part has made me a lot more confident in my ability to push myself outside of my comfort zone. I know I have said it before, but this time last year I didn’t think I would be able to do a triathlon because I had never done anything like it before. But having made it out of the other side, I can say that yes I can, and I could do again. 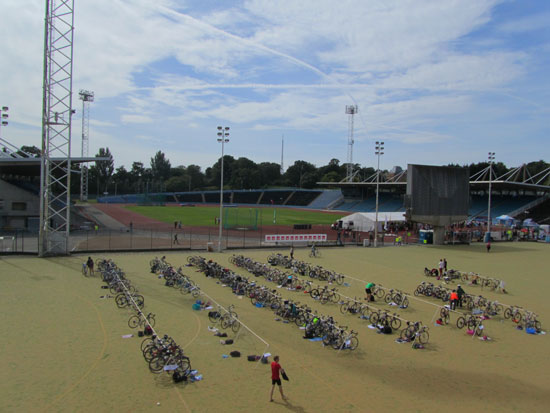