No nudity in transition. This is one of the rules of triathlon we learned this week.

No nudity in transition. This is one of the rules of triathlon we learned this week.

In fact, we learned a lot of things about the transition between the swim and cycle stages that we didn’t know prior to signing up for the sprint triathlon in September. Every time I use jargon like ‘sprint’ or even ‘transition,’ I realize how far I have come since last year when I didn’t know in which order the disciplines went.

Apparently people run out of the pool, swimming costume on, then strip off to change into their cycling shorts and tops, but forget they are in the open air, in front of crowds of once cheering, then shocked, onlookers.

Another silly mistake is putting your helmet on before your cycling top – something to avoid on race day if possible.

Leonard Cheshire Disability organised a free training day for everyone taking part in the event in September, which we knew we had to attend. I was really nervous about going, because I thought it would be a big reality check about what we had got ourselves in for, but I really enjoyed it.  It was held at the venue we will be doing the triathlon at, so it was really good to see. It has made it seem less daunting.

We hired bikes from a local hire store, which happened to be at the top of a very big hill next to the venue. This was fine on the way there, because we happily strolled up to the top of the hill and then rode downhill pretty quickly, but going back up that hill after a day of training to return the bikes was very difficult because I was really tired. I must have looked out of breath, because someone passed me in their car, wound down the window and shouted ‘you can do it!’ which made me smile.

Hopefully on the day, there will be lots of people shouting encouragement, which will help drive us forward. At the very least, our family and friends will be on the sidelines.

We started the training day learning about transitions. I wasn’t sure what to take with me, so I packed a bag with all my sporty clothes, just in case we would change in between events. I had my new cycling leggings with me, which I bought recently and haven’t had a chance to wear yet. I imagine these will change my cycling life. I am actually looking forward to sitting on the padding. I imagine it to be like perching lightly on a soft cushion and gliding along, pain free, into cycling heaven.

It may not be quite like this, but anything that prevents a sore bum is fine by me.

It turns out that all I needed on the training day was a swimming costume, but that was fine as well. The rest of it I did in casual clothes.

Standing out in the car park of the leisure center, bare foot, was, shall we say, a realistic way of introducing us to transition. It was to show us that we would be coming out of the pool bare foot, and to practice putting on our sneakers quickly.

Using the same logic, we also took off our sweaters. So a small group of us stood on a grey, rainy London day, in a grey, concrete clad car park, without a sweater or shoes on, standing next to a rack of bikes.

They were perched on a special rack, I don’t know the name of it, all lined up and ready to go.

Starting from near the door of the swimming pool and dodging the puddles, we ran to the bike racks, put our sweaters on, then our shoes and socks then our helmets. We fastened the helmets, took our bikes down from the racks, ran to the starting line, got on then cycled a short route and back again.

And just like that we had done our first transition!

I won’t lie, I encountered a hazard that I hope other people will avoid after this. When taking my bike off of the frame, I trapped my forefinger in between the saddle and the frame as I was unhooking it from the bar. Admittedly this was my fault, as I wasn’t taking the bike down correctly, and it hurt.

Apparently you have to keep your arm below the bar and grab the bike frame from underneath instead, keeping your fingers far away from the bar.

Race marshal Audrey Livingstone was one of the team of coaches at the training day to help all of us beginners have some idea of what was to come.

She helped to explain that we needed an area at the transition to lay out a towel, with shoes and helmets all pointing the right way to make it easier to get them on more quickly. By right way, I mean shoes set up as if they were about to be put on, and helmet top down with the straps laid out straight so that they can be fastened quickly. A towel on the floor is to wipe wet feet and put your gear on to keep it separate from other people.

And once it was explained, it made perfect sense. The transition seems to be all about speed. If you get your shoes on quickly, and do up your chin strap smoothly, then it could cut minutes off your overall time.

After the transition lessons we took to the saddle for a quick ride on part of the cycle route. It starts off with a brutal hill, but thankfully that’s the only one. After that we do six laps of the park and then it’s back to the transition area to drop off our bikes and then start the run. The cycle route is nice and green, with trees and flowers along the paths. I don’t think I will notice things like this on the day – I think I will be too tired to notice!

It was quiet there and it was raining bullets, but we were assured that on the day there will be lots of people cheering us on, and there will be marshals, flags, markers and refreshments there. I am looking forward to the atmosphere; I just hope I am not too exhausted to appreciate it. It made us feel like we should step up the training, and rest assured we will do just that.

Later on we took to the pool for a swimming lesson that reminded me of my younger days with an instructor. We did a few lengths and talked about technique. We used floats, which was definitely a throwback to swimming lessons a la 1996, but it was helpful to use them to concentrate on kicking techniques.

Although not everyone will get a chance to attend a training day like the one we went to, research into techniques and what to do on the day will help a lot.

It was good to have the transitions explained, and some of the practicalities of the day laid out, which made the event itself seem a lot less daunting. 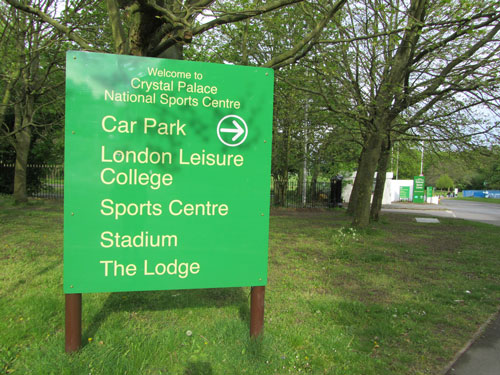 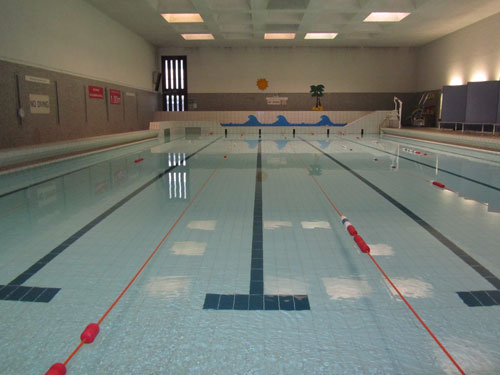 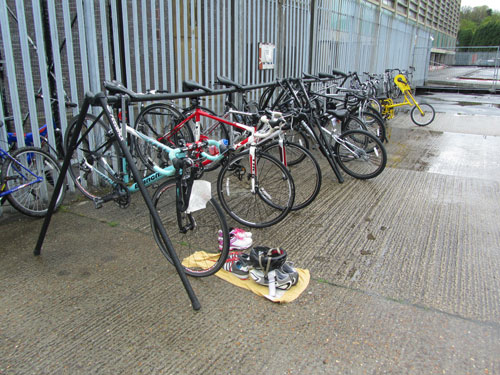 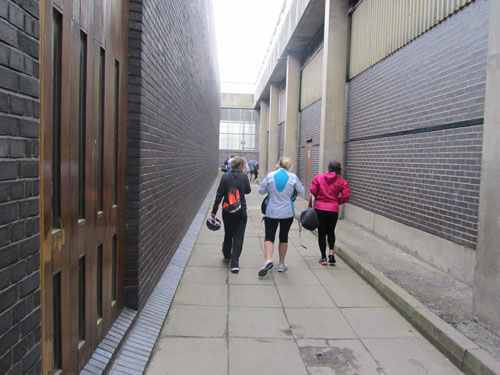 Picture used with permission from author