Just go out there and become it. 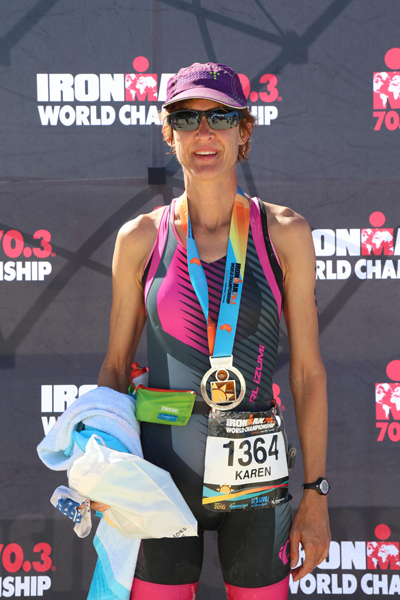 At the beginning of The One and Only Ivan, a book I often read aloud to my fifth graders (which has absolutely nothing to do with triathlon—it’s about a captive gorilla!) is a quote, wrongly attributed to George Elliot. “It is never too late to be what you might have been.” Over the years, I’ve come to realize how much that applies to my life, and maybe that of others on this forum.

For years and years, I was the triathlete who "might have been". In retrospect , it seems amazing that I managed to avoid the sport until nearly age 41. If there had been a “most likely to do an Ironman” category in my high school yearbook, everyone would have nominated me. Why?

Seriously! It was almost as though the sport and I just weren’t meant to be, or (maybe closer to the truth) I was deliberately avoiding it.

I walked away from serious running before even turning 21—not injuries or burnout, but lacking the belief that I had what it took to be national or world class, and the support systems that I needed to pursue a serious running career. In retrospect, it seems rather silly. Marathoners usually peak in their early 30’s. I’d done my best race, a 2:43 on a hot, hilly course, before even turning 20, beating many women who’d run in the 2:30’s on faster courses. My last mile of that race, desperate to run a PB, was 5:25. I’d run a 1:16 half. I may well have had a 2:30 or faster in me. I still wonder what I could have done had a coach taken a personal interest in me and said, “Look, you may not have the speed to be world class in the 10,000, or maybe even the marathon, but have you ever considered triathlon? Long-distance triathlon?” I’m slightly built, not blessed in the strength department, and will never have the goddess-like body of a Daniela Ryf or Chrissie Wellington, but many of the top pros have their strengths and weaknesses, and somewhat quirky body types. Look at Rinny! I did have a solid swim, good run speed, endurance in spades, and the ability to work very hard. I think if I’d entered the sport in my 20’s and gotten proper coaching, I “might have been” successful at the pro level. But in the end, I blame myself. It takes an enormous amount of self-belief and support to be a successful athlete, and at age 20, overwhelmed by the prospect of starting on my adult life, I just didn’t have that.

Fast forward to age 40. I’d spent years working in jobs that left me little time to train, or (in China) in an environment not conducive to it. Running had long since become something I did for fun, when it was convenient. In 2009, I quit a job I didn’t like in the States, and returned to international teaching in Saigon, where I discovered that due to the 12-13 hours of daylight year-round and slightly shorter work hours, I had some time on my hands to try to get back in shape.

I started trying to run regularly again in preparation for a destination half-marathon at Angkor Wat in Cambodia, but it was tough going. I was out of shape and often in pain from low-grade injuries. Worse yet was the heat. I knew that to get back in shape, I had to get out there and run consistently (I’d been averaging 1-2 runs a week for years), but it was difficult and often no fun. Then one morning I saw a note on our faculty message board—the swim coach was starting a master’s club at our school pool.

I thought that swimming as cross-training might be the solution to getting back into shape in the tropical heat with a cranky body. I could swim 3 or 4 days a week, and run 3 or 4. And that’s what I did. I discovered that several people in our group were triathletes; one guy was training for an Ironman. Another crazy like Coach Bill, I thought. The coach knew I was a runner, and assumed I was getting into tri. No, I said, I just want to keep in shape for running. He laughed and said, “You’ll change your mind.”

My date with triathlon was coming. There was a small event the following spring, an off-road tri put on by a fruit company that involved a 350m swim, 25 km bike (some of it off-road on sand dunes) and a 5 km beach run. Several people from the master’s group were going to do it, and they urged me to join. I still remember the coach’s words, “You can swim and you can run. Don’t you dare tell me you’re 40 years old and don’t know how to ride a bike!” A couple of colleagues and good friends had done some tris before and were signed up; they were going to make a beach weekend of it, so I let myself get talked into the race. My date with triathlon destiny had arrived.

We won’t go into the boring details, or the chicken that I probably killed, but I ended up second overall in that small event. It impressed on me that:

1. This was something I might be good at and enjoy.

2. My talents do not lie with off-road triathlon. The world is safer without me racing on a MTB. And

3. Not all triathlons are full IM distance.

That experience led to my first attempt at the Olympic distance a few months later (riding a rental MTB, I was 123rd out of 136 on the bike leg!), buying a road bike a month after that, somehow placing 4th overall in a pretty major SE Asian event (Bintan Oly) the following spring, despite having no clue what I was doing, and winning overall at the Vietnam Tri the following year. I began to place regularly in my age group, and occasionally overall, on the Singapore race scene.

Since then, it has been a long journey, with plenty of plateaus and setbacks and the occasional success. At times, my athletic life has seemed like a triathlon version of Groundhog Day. I got sick with colds or flu two years in a row before two different races. I also ran close to the same time for the Olympic Tri three times in a row. I once did exactly the same swim split, two years in a row. Most memorably, I got a horrid case of the flu two days before IM Vietnam 70.3 in 2015. I finished anyway—okay swim, good bike, worst run of my life.

But looking back, that horrid race (I was so far gone I was picking discarded ice chips off the ground and shoving them in my mouth) was a turning point. I did the math, and realized that if I’d even done a mediocre run, I would have gotten onto the podium. A strong run would have put me on top of it and on a plane to Austria for Worlds that fall. “Shoulda woulda coulda,” said someone with whom I shared these observations. I just shook my head and said, “Gonna.”

A 5:32 HIM at a tiny race in Washington State in summer of 2015 cemented my belief that there was more in there waiting to be tapped. (Special thanks to Steve Peschek, AKA Popsracer, for helping me twice find local races in Washington State when when various HIM quests fell flat.) Thus transpired an ENTIRE YEAR of triathlon Groundhog Day. I fired myself as coach. I didn’t know squat about bike training, for starters, or training stress, or anything other than “easy” and “hard”. I hired someone much more qualified, bought a power meter, and trained my brains out, basically, for six months, until exactly 12 months later, I was back on the starting line at IM Vietnam 70.3. Triathlon Groundhog Day.

This time, it worked. I managed to do a good race when it mattered, winning my age group and qualifying for the World Championships in Australia. I also had a great race at IM Calgary 70.3 this year, when I placed second in my AG in a very competitive field on a tough course in 5:16, surprising even myself.

Unfortunately, my typical bad luck came back to haunt me at Worlds. I managed to get self and bike to the race in good form, and had a decent swim and run, but was one of many people to miss a key turn on one loop of the bike course. (You can find some discussion of this kerfuffle on Slowtwitch, if interested.) Many athletes DQ’d as a result; in my case, I caught my error on my second loop, asked an official if there was anything I could do to avoid a DQ, and was told to re-ride the loops in the proper order. This resulted in at least 10K of extra riding on a hilly section of the course. I felt like I was going to throw up, or lie down by the side of the road and cry. But what would I then say to my students? I made a mistake, had a problem, so I gave up? What kind of example would I be setting then? No, I decided. I will just do what I can do, and finish what I started, which is what I ask of them.

In the end, I finished 47th in my age group, out of 95 athletes (5 of whom DQ’d themselves for missing the turn or an entire lap). Without my extra lap, and with a slightly more motivated run, it “might have been” somewhere between 18th and 25th. Best guess. Coulda woulda shoulda….

Nope, gonna. I want to go back and do it right. I am neither particularly talented nor lucky, but I am very, very stubborn. I have done Groundhog Day before and I will do it again, if I have the life and health to do so. That is never certain, always a gift, and (thinking of Popsracer here) one we should never take for granted. But if I have it, I will continue to do my best. And I hope that you will too, whatever your goals in the sport happen to be. After all, there is always another age group, another athletic adventure, somewhere out there, until we cross that final finish line. Amazing athletes like Lew Hollander, Garth Barfoot (the oldest man at Worlds—in his 80’s) and Sister Madonna Buder continue to show us that, truly, it is never too late to be what you might have been. Just go out there and become it. 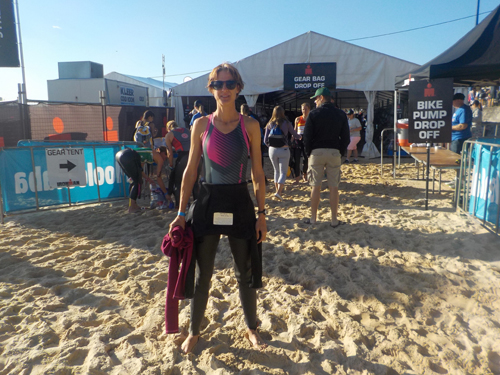