Give This to Your Mom and Dad - Part II

How a father and son went from zero to marathon and had the experience of a lifetime!

I intended for Part II of this series to dig right in to how older folk can get into fitness - ideas and suggestions that can change your lifestyle. In the meantime a friend and colleague, Jim Wakelin and his son of Iowa did an amazing thing. They went from scratch to marathon as a father and son team and had an experience that changed both of their lives and created a bond that could come no other way. This is a beautiful story. It inspired me and I hope it will inspire you. Jim gave permission to share this account of their story:

"Standing in the predawn light at 6:45am in 53 degree weather, surrounded by hundreds of people who were there, on the corner of 19th and Capital Ave in downtown Omaha, about to embark on a journey my son Stephen and I had never ventured to do before, run 26.2 miles in one stretch. Running a marathon is not an easy task, everybody knows that. But until you've actually taken the leap of faith and attempted it you never quite understand. What is it that pushes a person to run 26.2 miles in one day? A handful of thoughts come to mind. There's the challenge, the discipline, the adventure of going somewhere you had never gone before, the pursuit itself. Part of the draw was the spiritual journey along the way, time spent in solitude just me, the road, and God. When you're running your mind has little to do, your body is focused and I found it to be a great time to reflect on the day, on relationships- both the cherished ones and the challenging ones, and pray.

We began our training in May around Stephen's graduation time. We were talking and both of us agreed it would be a fun way to celebrate the end of high school days - running a marathon together, how unique. That was twenty-one weeks and some 500 miles ago. We began formal training with a sixteen week program following the coaching of David A. Whitsett, Forrest A. Dolgener, Tanjala Jo Kole in their book The Non-Runner's Marathon Trainer- a book given to both Stephen and I by fellow marathoner and friend Brenda Johnson whose family was our biggest vocal encouragement outside our family. (This is a book I highly recommend for the first time marathoner.)

In the weeks leading up to our marathon people were curious as they asked the whys and hows of marathoning. Some thought we were crazy, thinking it to be nonsense and a waste of time, others were proud of us and encouraged us on, and still others were inspired. The how we did it was easy. Just put one foot in front of the other until you were done. It took many weeks of preparation, training, and listening to those who had done it before, but as odd as it may seem, when I look back over my shoulder now I must say in some ways it was easy. Ironically I don't like to run that much. But once we made up our mind to do this it was fun. Even now as I sit with legs that ache from the cramps and overuse of some 48 hours ago, I can whole heartedly say it was fun and worth every step of the journey. 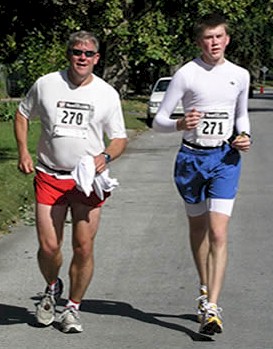 The marathon itself went well. The longest I had run prior to this was eighteen miles in one stretch. This was 8.2 miles longer than that. At one point I was told that mentally you reach the half way point about mile 20. How true! How true! The last six miles proved to be the most taxing mentally and physically of all the pursuits I have taken on. Those last six miles were unbelievable. It was the type of father and son shared experience the words could not touch. My wife, Diane, worried for Stephen as a foot injury took him out of the last month of training. (the meat of the training program) But youth and four years of cross country training under one of the best coaching styles I have ever known (Linda Rowe) was on Stephen's side and as we passed the twenty mile marker it would be Stephen who would be the stronger of the two of us. We pressed on as we reminded ourselves over and over again, it doesn't matter. "I'm tired!". but it doesn't matter. "I want to sit down" -but it doesn't matter. "My legs hurt" - but it doesn't matter. "I don't know if we can make it or not.' - but it doesn't matter. Every negative thought when followed by . but it doesn't matter was nullified. What mattered was that our goal was to finish and we did so beating our bodies to the point where they would complain for the next 48 to 72 hours. But we finished with heads held high. As we crossed the finish line together we hugged and were overcome with the intense feelings of the moment. My wife had succumbed to tears. My mother-in-law stood in disbelief that we had actually done it. Strangers came up to confirm that we had done this as father and son. And I was left numb, sore, yet ecstatic, overwhelmed with emotion in the reality of what we had just accomplished. As we crossed the finish line my nephew asked, "So are you going to run another one?" And I felt like the quarterback who had just won the superbowl game as he was asked "What are you going to do now?" With the pat answer being. "Why go to Disneyworld of course." Well I don't know if we will head to Florida in January for the Disney marathon or not but what I do know is that this was one of the greatest experiences of my life. One that I will look back on, give thanks to God for, and know that I have lived and pursued life with zest, conquering the fear of failure, stepping out where few have in hopes of better knowing myself and my God.

I learned a lot through this adventure, the sum of which is an understanding that in reaching for those things in life that seem impossible to some and ridiculous to others, it is only one thing that truly matters. That being do you believe. do you believe. To believe you can is the strongest force we have, and so I choose to believe. 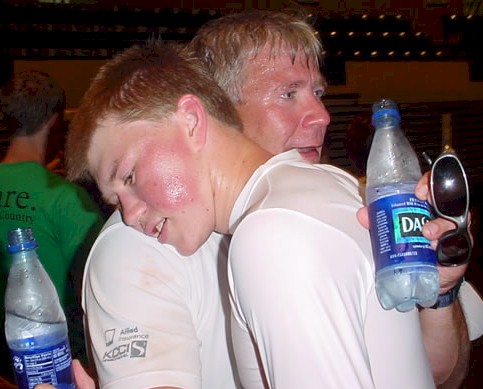 This was confirmed to me as we were leaving the Civic Center heading to our cars that Sunday afternoon. The vendors were packing their wares, the volunteers were wrapping up their statistics, the custodians were cleaning up the spoils of the day as we looked up and there on the route finishing the marathon was the last man who had the greatest courage- a 58 yr old from Arkansas who finished in a time of 6 hours and 55 minutes. This man had the biggest heart of us all. We had encountered him a half dozen times on the route and each time I marveled to see him struggle because his gate was not smooth or easy. Each step of his journey was saddled with the limitations of one who was challenged with a physical handicap. And my heart cried that day as I watched him finish, knowing that only a few would remain to pay him the respect and honor he deserved. He had missed the ceremonies, the fanfare, the hoopla. But it didn't matter, because he believed."